The 2019 SADC Gender Protocol Barometer breaks with past tradition in focusing solely on Sexual and Reproductive Health and Rights. Measuring 100 indicators across seven themes, the Barometer is the first civil society shadow report on SADC’s new SRHR Strategy Score Card, ranking countries based on their performance, while offering detailed analysis and insights into […]

This pamphlet looks at gender and gender identity as well as sexual orientation and sexual practice. It contains definitions of terms and speaks to labels or groupings used to break down human sexuality for many people to understand.

This toolkit contains sessions and modules on reproductive choices, child marriage, SRHR-HIV integration, adolescent and child sexuality as well as disability and sexuality. It also covers Sexual orientation and Gender identity (SOGI) with modules on sexual abuse and gender based violence, religion and abortion.

Gender identity refers to a person’s deeply felt psychological identification as a man, woman, both or none, which may not always correspond to the person’s body or sex assigned at birth.

This is PAI’s second annual report, it offers an account and record of the activities of the organisation covering the period of 1 March 2017 through 28 February 2018. It has a been a period of immense growth following an initial period of institution building and consolidation. It reflects that, despite operating in an extremely challenging […]

The Pan Africa International Lesbian, Gay, Bisexual, Trans and Intersex Association (PAI) is the Africa regional affiliate of ILGA. PAI is a federation of 72 organisations in Africa working for human rights and equality for LGBTI people. The work of PAI seeks to improve human rights based on sexual orientation, gender identity and expression. In […] 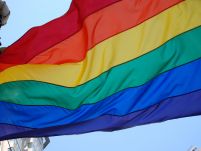 By Jeffrey Moyo Chitungwiza ,5 December- Just two years ago, they used to be met with violence and resentment. Now, 27-year old Lucy Mthombeni and her 19-year old lover, Trish Musoko- a lesbian couple, move freely about in Chitungwiza, a dormitory town 25 kilometers south-west of Harare, the Zimbabwean capital. Before the ouster of Zimbabwe’s […]