Q: What should this global fund be used for?

Q: If your locality were to be given a budget to address climate change, what activities would you fund?

Q: How much would go towards addressing women’s concerns? 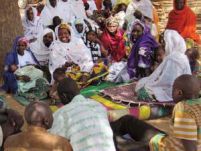 This handbook is designed for all development practitioners (not only communication/ information specialists) and was born out of the observation that all too often, gender is overlooked in the design of communication initiatives for development in rural areas and that rural populations, women particularly, are rarely viewed as primary sources of information. This has an impact on the action of communication with consequences that vary from reduced efficiency to adverse results.

Life will never be the same for Ms Mositi Disang of Serowe after recieving a four roomed house from Botswana Democratic Party (BDP) National Womens Wing over the weekend.
Ms Disang who could not hold tears during the handing over ceremony of the house told BOPA that her dignity was now restored courtesy of BDP Womens Wing..
The sickly 42 year old single mother of seven said said she has been impoverished to a point where she could not afford to put a roof above her head.

Is HIV/ AIDS epidemic outcome of poverty in Sub-Saharan Africa

Undisputable fact is that 14 000 people in Sub-Saharan Africa are being infected daily with HIV and 11 000 are dying every day due to HIV/AIDS related illnesses. In this region more than 60% of the people live below UN poverty line of US$ 1 per day. Some studies have shown that poverty and HIV infection are in correlation, but none has shown whether HIV/AIDS in Sub-Saharan Africa is an outcome of poverty. This article, therefore, shows that HIV is an important outcome of poverty, with sexual trade, migration, polygamy, and teenage marriages as its predictors in the Sub Saharan region.

On Friday last week,the UN in Lesotho and its various agencies-among them the World Food Pragramme,World Health Organisation,United Nations Children’s Fund,Food and Agriculture Organisation,UNAIDS,United Nations Development Programme and the United Nations Population Fund-held an Open Day at the UN conference Hall in Maseru,to interact with varios stakeholders,as well as members of the general public.

In his welcoming speech,the UN resident coordinator,Imad Osman-Salid,said the event sought to reinforce the message that UN was ” a vehicle for people”,”I commend Lesotho for partnering with UN in caring for the poor and vulnerable,as our mission includes,among others,principles of equality,social justice and seeking help for women and children living with HIV/AIDS” SAID Osman-Salih.