Described as a modern form of slavery, the trafficking of women in Africa has as devastating consequences as the Trans-Atlantic slave trade. Taken from their families – whether willingly or not – their bodies labour and beings exploited for capital; trafficked women are vulnerable to a range of psychological, physical, emotional and economic threats.

A woman for President in Zambia?

As the race for Zambia?s presidency shifts into gear in preparation for the country?s 2006 parliamentary and presidential elections, Forum for Democracy and Development President Edith Nawakwi is proving a tough contender as she seeks the support of the Zambian women?s movement in her political bid.

Women make up over 60 percent of the voters in Zambia, and their vote is crucial to Nawakwi who has a chance at becoming Zambia?s first female President.

“This is one of them,À laments Likeleli Maseko*, pointing out an advert posted on an electrical pole along Maseru Kingsway. I ask, “One of what?À Her reply is chilling. “Glamorous false job offers that lure girls and young women abroad.À

It is hard to believe that in the modern day world, you can buy and sell a woman against her will. What is even more amazing is that those engaging in such a trade often do not even feel the need to hide it all that much.

“No Experience Necessary”: The Internal Trafficking of Persons in South Africa

The International Organization for Migration (IOM) with funding from the United States Agency for International Development (USAID) initiated an assessment of internal trafficking of persons in South Africa. Completed over a period of six months, beginning in March and ending in September 2008, the aim of this research was to provide relevant qualitative findings concerning […]

"Anyone here been raped and speaks English?’ : Workshops for Editors and Journalists ongender based violence and sex-trafficking

Editors and journalists who have been trained to understand issues of gender-based violence and human rights can have a positive influence on educating public and political understanding of these issues. This article describes two workshops held recently in Senegal and Albania for male and female editors and journalists. The UNFPA workshop for journalists and editors […] 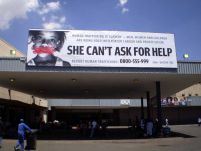 Despite being a multi-billion dollar global business, human trafficking remains a well-kept secret. In Southern Africa, where porous borders make this devastating crime a big concern, organisations are stepping up action to draw attention to the problem.