Related pages: Ringing up the changes | At the Coalface: Gender and Local Government

Research Ringing up the changes

Ringing up the changes 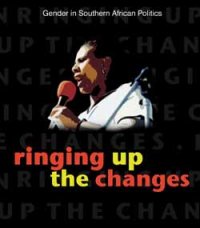 Where women are represented in politics in significant numbers and work enabling environments, they make a marked difference to governance, according to the first qualitative study of women in decision-making in Southern Africa.

The study, based on interviews with 172 politicians in six Southern African countries concludes that women’s equal participation in decision-making is not just a democratic right, but is critical to more accountable and responsive governance.
In a foreword to the book, the former Secretary General of the Fourth World Conference on Women, and Tanzanian MP Gertrude Mongella says that

“what is exciting about this research is not just the complex picture it paints and the way the authors (a combination of academics and journalists) allow the principal players to speak for themselves. It is the fact that it emanates from the developing world, and has been conceptualized, researched, written and produced from beginning to end by women in my region.”

Justice Athalia Molokomme, a Botswana high court judge and former head of SADC Gender Unit adds: “This reader-friendly and yet analytical book is a welcome addition to the growing literature on gender and governance in Southern Africa. It could not have been more timely – the year 2005 has been identified by SADC as the deadline for countries to close the gender gap in politics.”

A rich source of information presented with wit, humour and a feast of anecdotes. A must have for all those who believe in democracy and strive for a better world.

In 1997, heads of state of the fourteen Southern African Development Community (SADC) countries signed a Gender and Development Declaration in which they pledged to achieve a thirty percent representation of women in decision-making by 2005. But so far only Seychelles (which recently dropped out of SADC), South Africa and Mozambique have reached this target for women in politics. Three countries will not have elections again until after 2005. But nine SADC countries have elections between now and the end of 2005, making the timing of the book significant. At 19.4 percent, the regional average for women in parliament is higher than the global average of 15.4 percent. Although there are vast differences between countries (for example from 5.7 percent in Mauritius to 30 percent in Mozambique) as a region Southern Africa ranks second only to the Nordic countries where the representation of women in parliament is concerned. The relatively high levels of women in parliament in South Africa, Mozambique and Seychelles, as well as local government in Namibia and cabinet in South Africa (where there are one third women, many in non-traditional posts) make it possible to start assessing the impact of women in decision-making in the region.

The study, led by veteran South African politician and GL Chair Thenjiwe Mtintso, and edited by GL Executive Director Colleen Lowe Morna, included fieldwork in these four countries. For comparative purposes, the study also included fieldwork in Lesotho and Zambia, where the representation of women in politics remains relatively low.

The visible ways in which women’s participation in politics, especially in substantial numbers, is shown to make a difference in the study include: