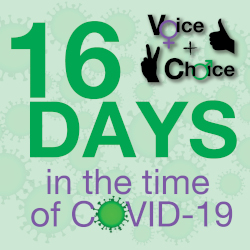 The #Voice and Choice campaign, launched in August 2018, builds on the global and regional momentum on SRHR. It moves the gender justice agenda from the Post 2015 era to include individual and collective voices to advocate for change. The agenda is driven by citizens’ demands and voices. By improving citizens’ wellbeing, institutions and other stakeholders are building a critical citizenry that can hold governments accountable.

During the 16 Days of Activism against Gender-based violence from 25 November to the 10 December Gender Links and the Southern Africa Gender Protocol Alliance will hold dialogues on key thematic areas with stakeholders to take stock of what was achieved over the last year and identify priorities for the next year. Evidence gathered through the 2020 #Voice and Choice Barometer will guide discussions. Click here for a list of all cyber dialogues.