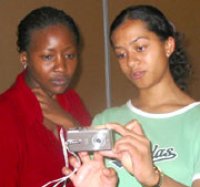 From 2011-2015 Gender Links has established Centres of Excellence (COEs) for Gender in the Media as a follow up to gender and media research, advocacy, training and policy work.  With support from DFID UK , GL went  beyond the six stage gender policy process (buy in, situation analysis, inception workshop to develop a policy and action plan drafting, adoption, monitoring and evaluation) to include on-the-job training; self-monitoring and sharing of good practices at the Gender and Media Summits.

This work was build other policy engagements with media houses. With support from the EU CWCI Fund, GL convened a workshop of media and gender activists in February 2001 that led to the book: “Whose News, Whose Views: A Gender and Media Handbook for Southern Africa Media”.

The book was launched on World Press Freedom Day in May 2001 at a gathering of editors to celebrate the tenth anniversary of the Windhoek Declaration on media freedom in Africa.

After an initial print run of 800 that ran out within months the EU CWCI Fund sponsored publication of a further 1500 copies which have been widely distributed within the SADC region. Click here for the Executive Summary

One of the key strategies identified for bringing about greater gender balance and sensitivity to the news is for media organizations to develop gender policies and targets. MISA led the way with the adoption of a far-reaching gender policy, devised at a workshop facilitated by Gender Links. The policy places advocating greater gender balance and sensitivity in the media within the broader debates on press freedom.

GL has worked with a number of media houses in the region to develop gender policies. These include the Mauritius Broadcasting Corporation (MBC), a public broadcaster; the Times of Zambia (a state owned newspaper) and Kaya FM, a commercial radio station in South Africa.