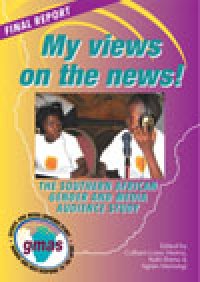 If there was a doubt about the gender biases in the editorial content of Southern African media, researched conducted by GL since 2002 provides the evidence that women are both under-represented and portrayed in limited roles in the news. But how do audiences – women and men – view discrepancies? Are they aware of them? What do they like or dislike about the news? What would they like to see more or less of?

A sequel to the Gender and Media Baseline Study (GMBS) conducted in 2002, the Gender and Media Audience Study (GMAS) is both the first ever major regional study on media consumption patterns generally in Southern Africa, as well as the gendered dimensions of this. This study conducted by Gender Links in partnership with the Media Institute of Southern Africa (MISA) , the Gender and Media Southern Africa Network (GEMSA), universities and media advocacy organisations, with technical support from the South African Media Monitoring Project (MMP) covers 13 Southern African countries.
Click below to read country reports.
As a follow up to the study, media houses have been conducting their own audience research. Gender Links has worked with media houses in Malawi, Mauritius, Namibia, Botswana and  Swaziland.   Click for more  information and the in house audience research reports.