In 2018, Gender Links in partnership with the Media Development and Diversity Agency (MDDA) and South Africa National Editors Forum (SANEF) undertook  a follow up research on the Glass Ceiling in South Africa.

This South Africa  study is a follow up to the 2009 Glass Ceiling Research done by GL and borrows from the first Glass Ceiling done in 2006 in collaboration with SANEF. It also builds upon the recently completed Gender ann in South African media. GL is initiated the research in line with Section J of the 1995 Beijing Platform for Action (BPFA), which identified media as one of the critical areas of concern in achieving gender equality, under two critical areas, women’s equal participation in the media and decision-making positions. The research was also undertaken  in line with the revised SADC Protocol on Gender and Development that encourages States Parties to promote equal representation of women in the ownership of, and decision-making structures of the media. The research was launched at Emoyeni on 19 October 2018. Watch the video below of the 2018 South Africa Glass Ceiling research launch. 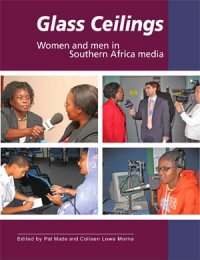 Spanning 14 countries over a year starting in July 2008, Gender Links (GL) conducted the study in partnership with a network of researchers, gender and media activists and partners in the Gender and Media Southern Africa (GEMSA) network as well as the Gender and Media Diversity Centre (GMDC).

The research covered media houses (as opposed to newsrooms) in countries in the Southern African Development Community (SADC) – Botswana, Democratic Republic of Congo (DRC), Lesotho, Madagascar, Malawi, Mauritius, Mozambique, Namibia, Seychelles, South Africa, Swaziland, Tanzania, Zambia and Zimbabwe – except Angola. This study, presents the data and findings from 126 media houses (approximately half of all media houses) in 14 of the 15 SADC countries, representing 23 678 employees.

For previous Glass Ceiling research see attached document for the Executive summary from the 2009 regional report. Click here for the Launch Workshops report.

Click on the links below to read the country reports.