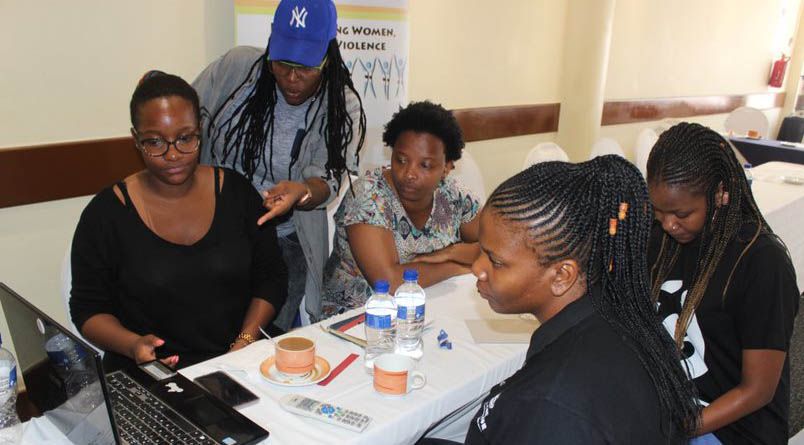 Research and advocacy have provided GL with useful information on gender gaps in the media leading to more informed and structured training initiatives. GL seeks to empower media practitioners with gender analysis skills and to build citizens capacity to hold media and governments accountable.

Between April and July 2019, GL sought to support the media to strengthen coverage and understanding of Sexual Reproductive Health and Rights (SRHR). This is expected to enhance the content and quality of stories produced in the media. The trained journalists committed to producing two SRHR stories. The stories were published in the journalists’ newspapers and or television channel and the GL website. This stories covered several SRHR topics including maternal health, menstural health, sexual diversity , adolescent SRHR, child marriages

As part of the training, journalists were awarded small grants to undertake field reporting on the different thematic areas using the skills and guidance learnt during their training. Journalists will also have the opportunity to learn from other media practitioners as well as share their stories in the #VoiceandChoice

GL’s training work has transitioned to a more demand driven approach where GL media training services have been sought by various stakeholders. In 2017 GL trained on gender sensitive reporting on Peace and Security for the African Union and UN Women. More recently in 2018, GL trained journalists in Tanzania for  a UN WOMEN  project on Component of the “Acceleration of Gender-responsive Sustainable Development Goals localisation coordinated by the UN Women Executive Secretariat Capacity Support Programme” funded by the Bill & Melinda Gates Foundation . The project aimed to focuses on media engagement in one pilot country, the United Republic of Tanzania, with the aim of expanding coverage of gender equality issues in the Tanzanian media within the broader framework of accelerating the implementation of the SDGs.

Over the years , GL’s training work has taken several dimensions including the development of a wide array of training materials and tools; short courses on different themes like gender violence, HIV and AIDS, SRHR, gender, elections and the media  and gender and economic reporting. In 2006, GL piloted a media literacy course for the general public in South Africa. This has since been extended to different targets groups in the region including school going learners, women in politics and journalism and media trainers. GL is taking forward the findings of the Gender in Media Education (GIME) audit through Centres of Excellence for mainstreaming gender in media education.