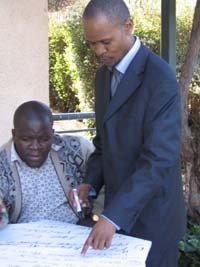 As part of the Centres of Excellence (COEs) for gender in the media project, Gender Links is conducting thematic training for media houses in the region. Training includes gender based violence which is one of the key focus areas of the SADC Gender Protocol. The protocol calls on media to be responsible in its coverage of gender based violence. These training workshops build on media training courses and materials developed by GL in 2002/2003 in 12 Southern African Development Community (SADC) countries and nine South African provinces.

In 2011 gender based violence workshops were conducted in close collaboration with local councils. Journalists were able to cover stories from local government Centres of Excellence in the participating countries.

Click here for the regional reports and the South African provincial reports.