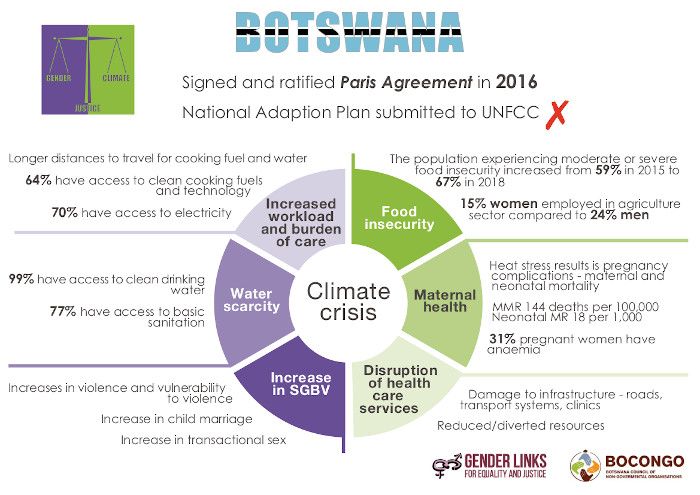 Botswana has observed considerable temperature increases and since the 1970s, and average temperatures have increased 1.5°C, with central, arid parts of the country’s interior observed to have increased by as much as 2°C. Rainfall is highly variable but an overall reduction has been observed across the southern Africa region. Higher temperatures, land and water scarcity, flooding, drought, and displacement in Botswana will negatively impact agricultural production, causing a breakdown in food systems, which will affect marginalised groups disproportionately. Botswana is one of the top three most food insecure countries in the region. Botswana, the prevalence of stunting in children under age 5 was 31.4% in 2008, the prevalence of underweight children and wasting in children under 5 was 11.2% and 7.2%, respectively.

The significant increase in temperatures and incidences of floods and droughts is expected to have significant adverse health effects. Currently, 30% of the population of Botswana is exposed to some risks of malaria infection every year. During years of heavy rainfall, the risk of malaria shifts westwards and southwards. Diarrheal disease may be exacerbated by climate variability and change as variable rainfall patterns are likely to compromise the supply of fresh and clean water. The effects will be an increase in vector-borne and waterborne diseases, severe malnutrition, and increases in flood incidence and displacement of people.