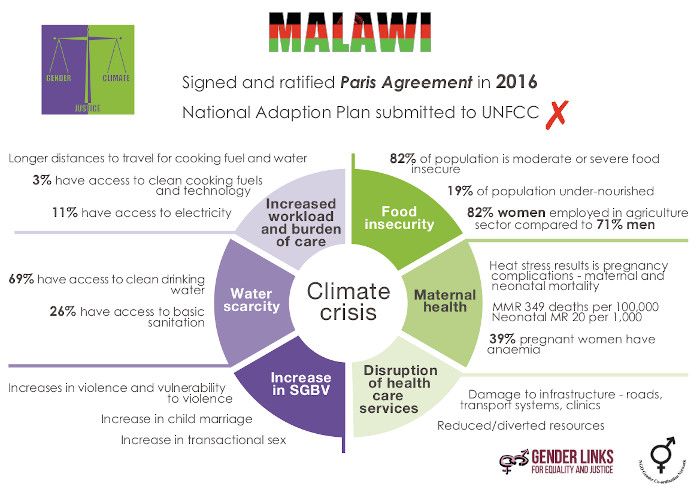 Malawi is a low-income country facing a number of challenges that increase its vulnerability to a changing climate, including high population growth, dependence on rainfed agriculture, high rates of malnutrition and HIV/AIDS and inadequate power supply. Poverty rates are high and on the rise in rural areas, where 85% of the population reside.

Agriculture is central to Malawi’s economy, contributing nearly 40% of GDP and roughly 90% of the country’s export earnings. Improving agricultural production is key to poverty reduction, but the increased frequency and intensity of drought and flood events hinder progress. In 2015 maize production fell by 30% due to floods in the south, followed by a countrywide drought that put 17% of the population at risk of food insecurity and depressed macroeconomic growth. The majority of agriculture production is rainfed and focused on maize. Erratic rainfall poses a challenge to maize productivity, as do higher temperatures and droughts, as well as dry spells during the rainy season. The increased frequency of droughts and floods, along with higher temperatures, negatively impacts on fisheries, wildlife and forests, which provide food, income, fuel and other environmental services to vulnerable populations.

Climate change is likely to exacerbate the generally poor health conditions in Malawi, which include high rates of infant and maternal mortality, malaria, diarrheal diseases, HIV/AIDS and malnutrition. As temperatures increase, the incidence of malaria is expected to increase and spread into higher altitudes, Recurring floods in the south put already vulnerable, displaced communities without access to clean water or sanitation at greater risk of cholera and other diarrheal diseases.