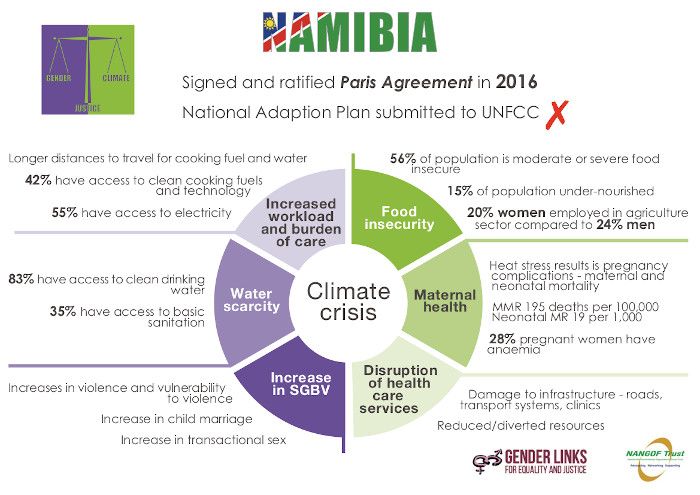 Namibia is one of the largest and driest countries in sub-Saharan Africa, characterised by high climatic variability through persistent droughts, unpredictable and variable rainfall patterns, variability in temperatures and water scarcity. The climate is generally hot and dry with sparse and erratic rainfall. 92% of the land area is defined as very-arid, arid or semi-arid. Namibia is highly vulnerable to natural disasters such as droughts, flooding, water scarcity, extreme heat, and wildfires. The population is at most at risk from floods, drought, and disease outbreaks. The 2013 drought in Namibia was so severe that it affected approximately 37% of the population and was declared a national disaster. In Namibia, floods have affected over 1 million people at a cost of approximately $100 million per year.

The agricultural sector is critical to Namibia’s economy and the overall food security and contributes approximately 7%–10% of the country’s GDP. Agriculture impacts directly on the livelihoods of 70% of the population which is largely dependent on rain-fed crop production, with nearly 48% of Namibia’s rural households dependent on subsistence agriculture.

Namibia’s health services are shared between the public and the private sector. Infant and child mortality is comparatively low, but the maternal mortality ratio has increased, despite the fact that over 70% of births are delivered in hospitals. The five leading causes of deaths (all age groups) are HIV/AIDS, diarrhoea, tuberculosis, pneumonia, and malaria. Malaria is one of the major health problems, however, year-on-year incidences of malaria are highly variable, and closely correlated with the prevailing temperature, rainfall, and humidity.