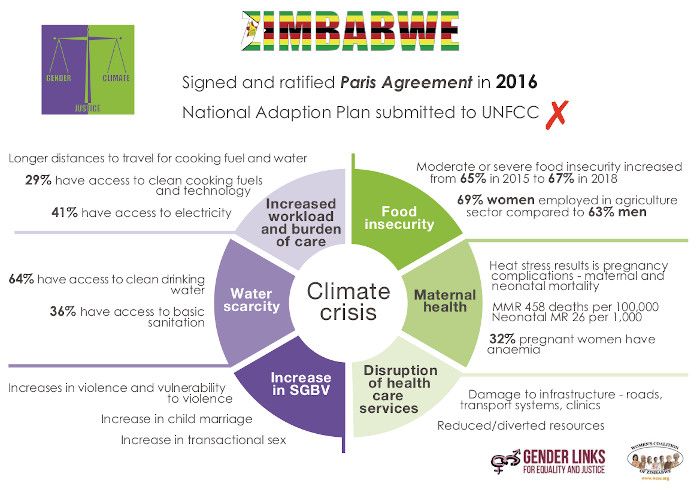 Zimbabwe has endured various natural hazards, including droughts, epidemic diseases, floods, and storms over the past century. From 1900 to 2017, events captured for Zimbabwe include seven drought events, 22 epidemic episodes, 12 floods, and five storms. These resulted in 7,000 deaths, with more than 20 million people affected, and total damage estimates of $950 million. Zimbabwe’s annual rainfall has been decreasing in the past decades and annual temperature has increased by roughly 0.03 degrees Celsius per year from 1970 to 2016.

In 2016, agriculture covered 42% of the total land area but accounts for 67% of the total employment. Approximately 80% of agricultural production is rain-fed and the remaining 20% is irrigated, making it one of the most irrigation dependent countries in SADC. This sector is therefore highly vulnerable to climate change, especially rainfall variability and climate-induced extreme weather events. Droughts lead to poor harvests and reduced productivity. They will have adverse effects on food security and malnutrition. Zimbabwe is one of the most food insecure countries in SADC: 67% of the population experience moderate or severe food insecurity.

Climate change is also predicted to have a wide range of impacts on human health including temperature related morbidity and mortality caused by extreme temperatures and those caused by extreme weather events such as malnutrition, water-borne, as well as food borne and vector-borne diseases.