What is the summit?

The Post-2015 Action and Results Era is here! Following a concerted advocacy campaign by the Southern African Gender Protocol Alliance, SADC Heads of State signed the Post 2015 SADC Gender Protocol in Mbabane, Swaziland in August 2016. Over 400 Centres of Excellence for Gender in Local Government have updated their gender action plans, setting new targets and indicators for the Post 2015 agenda. The 2016 – 2017 SADC Protocol@Work Summits provide a platform for knowledge dissemination and sharing of best practices across the SADC region. The summits are to be held under the theme: 50/50 by 2030: Empower Women, End Violence, coincide with the Sixteen Days of Activism from 25 November to 10 December in 2016.

The 2017 summits are planned for in Mauritius and South Africa. In the spirit of strategic partnerships and sustainability in South Africa, Capricorn District Municipality in Limpopo Province will host the Swaziland delegation in a joint summit planned from 14 to 15 March 2017. Gender Links embraces this innovative and cost-effective strengthened partnership as it promotes sustainability, sub-regional integration and cross-pollination of best practices.

Target groups – leave no one behind!

Adopted in 2008, the SADC Gender Protocol is a unique sub-regional instrument for promoting gender equality that brings together regional, continental and global commitments to gender equality in one instrument, with an initial alignment to the Millennium Development Goals that expired in 2015.

From 2015 to 2016, the Alliance mounted a concerted campaign for the adoption of a strong Post 2015 SADC Gender Protocol in line with the Sustainable Development Goals (SDGs). The SADC Gender Protocol is unique among SADC Protocols for being reviewed and updated in light of the changing times. In August 2016 SADC Heads of State adopted the Post-2015 SADC Gender Protocol, aligned to the SDGs, Beijing Plus Twenty and the African Agenda 2063. Although the revised Protocol drops all references to specific timeframes, it will be accompanied by a Monitoring, Evaluation and Results Framework that incorporates the gender targets and indictors of the SDGs, that are due to be achieved by 2030. Notable gains include stronger rights based language, especially on Sexual and Reproductive Health and Rights, as well as a new section on Gender and Climate Change. Please see the here the Post 2015 SADC Gender and Development Protocol.

The 2016 SADC Gender Protocol Barometer detailing all these developments can be accessed here. The executive summary and attitudes survey can be accessed for free. The full Barometer and or chapters can be ordered online as detailed on the website.

Since June 2016, the over 400 Centres of Excellence for Gender and Local Government in ten SADC countries have been updating their gender action plans in line with the Post 2015 SADC Gender Protocol and the Sustainable Development Goals. The summit offers an opportunity to establish new baseline scores for the action plans and to gather data on Gender Responsive Budgeting.

Since 2013, GL has worked with 1500 survivors of gender violence in a unique life skills and entrepreneurship training programme linked to the Centres of Excellence for Gender in Local Government. An extension to the programme includes mentorship and access to business opportunities.   Mentors will assist in selecting entrepreneurs to participate in the summits as illustrated below: 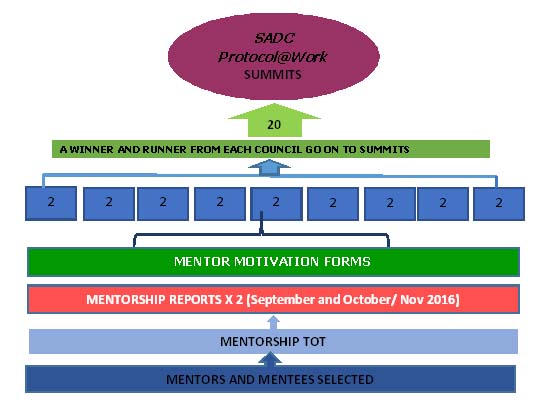 Link to the Gender and Media Summits in August

Only finalists may receive sponsorship to travel to the summit in each country. Others are welcome to attend but will have to make their own arrangements to do so. Self- sponsored delegates may register here .

For more information contact the relevant Gender Links country office on details below or the Head Quarters: governance@genderlinks.co.za or phone 00 27 (11) 622 2877.

The awards in each country comprise.

If you have any queries, please contact a GL country office or send an E Mail to mande@genderlinks.org.za.