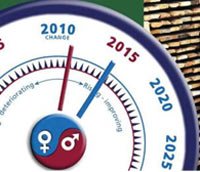 The SADC Gender and Development Index (SGDI) an innovation of the Southern Africa Gender Protocol Alliance is an objective weighting of how SADC governments are performing against the 28 targets of the SADC Protocol on Gender and Development to be achieved by 2015.The SGDI on the status of women in SADC countries is based on 23 indicators.

This complements the Citizen Score Card (CSC), based on perceptions by women and men in the region who have been part of reference group meetings on country barometers, village workshops, interviewed in unorganised settings and other protocol-related activities. While the SGDI is an empirical measure, the score card gauges perceptions. Both are important. The CSC has been running for three years now, and it is a key accountability tool.

How the SADC Gender and Development Index (SGDI) works
The indicators are grouped under six categories, namely Governance (3 indicators), Education (3), Economy (5), Sexual and Reproductive Health (3), HIV and AIDS (3), and Media (6). To create the composite index, each category was given equal weight by calculating the average score across the indicators in that category. So, for example, for categories with three indicators, the score for that category was the average across the three. This approach also solved the problem of how to deal with countries for which some indicators were missing, as the average was calculated on the available indicators for each country.

In order to standardise, all â € œraw scoresâ €  had to be converted into values that range from 0 (for the worst possible performance) to 100 (for the best possible performance). While the majority of indicators measure a desirable characteristic, for which a high score indicates good performance, there are a few indicators that measure undesirable characteristic for which higher scores reflected poorer performance (such as unemployment rate female share of people living with HIV, and maternal mortality rate). For these indicators the rate was inverted by subtracting the standardised rate from 100.

There are, unfortunately, no indicators for the Protocol articles on Constitutional and legal rights, gender-based violence and peace building and conflict resolution due to the difficulty in finding appropriate indicators with reliable data for these. These are areas that the Southern African Gender Protocol Alliance hopes to address in future years.

Click here to read more about the SGDI and CSC