Sexual Reproductive Health and Rights (SRHR) is a cross cutting theme in GL’s gender justice, governance and media programmes, and in its support to the Southern African Gender Protocol Alliance. This strategy document outlines the goals, objectives, context, and actions that flow from the strategy.

The goals of the SRHR #VoiceandChoice programme are to ensure universal access to healthcare, including reproductive healthcare, family planning, sexual health and rights through all of GL’s programming. This goal is achieved through the right to access education regarding sexual and reproductive health, enabling legal and policy framework, budget allocation, capacity building and sexual practices behavioural change. 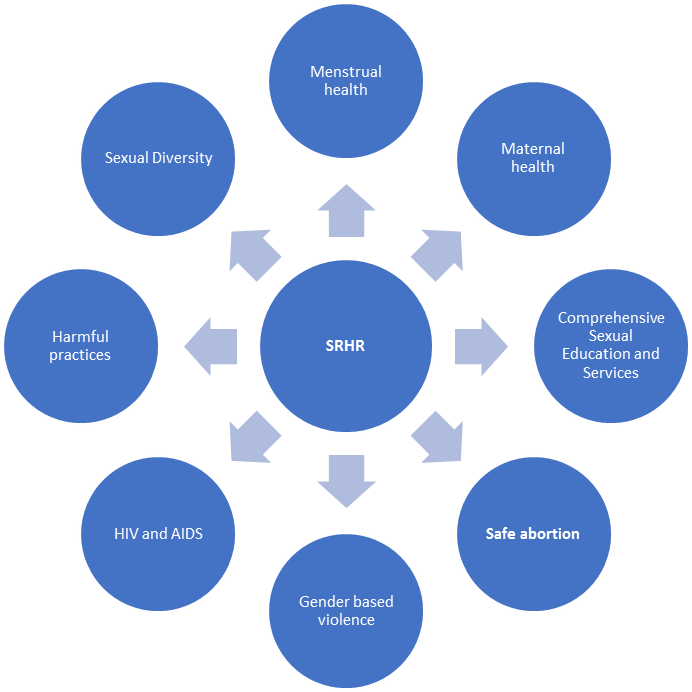 The objectives of the programme are:

Around the globe, 2017 will be remembered for the groundswell of women’s rights activism that began with spontaneous Women’s Marches as President Donald Trump took office in the USA, and gained momentum with the #MeToo, #TimesUp and #SheDecides campaigns. In a world where information moves with the speed of light, Southern Africa had its own variants to these campaigns – like the #MenAreTrash, #NotInMyName, #JusticeForKarabo #IWearWhatILike and #TotalShutDown, to name a few.

In March 2018, the virtual #SheDecides campaign came to Southern Africa, with a meeting in Pretoria that attracted several ministers, MPs and high profile personalities from the region; from progressive European countries as well as the Executive Director of UN Women, Dr Phumzile Mlambo-Ngcuka. Like the Sixteen Days of Activism that began as the brainchild of a few activists but has since mutated into a global campaign, #SheDecides is an idea whose time has come, and whose principles need to be customised by every region.

The 2018 Barometer, launched #SheDecidesSADC by putting a spotlight on SRHR. The 2018 Barometer abounds with evidence on the need for bold action on this front. The graphic illustrates how SRHR is a key cross-cutting theme. While the core chapters for this theme are health, HIV and AIDS and Gender Based Violence (GBV), issues of bodily integrity feature in the constitutional and legal, education, economic and governance chapters, to name a few.

As the tenth edition of the Alliance’s flagship publication went to press, Zimbabweans prepared to go to the polls after campaigns that served as a stark reminder that politics is still an unwelcome space for women. Four women presidential candidates were variously derided for their marital status; referred to as witches and “hures”, a derogatory Shona word for prostitutes. While women are not likely to make significant gains in the polls, the elections will be remembered for women finding their voice and claiming their space amid the misogyny, with one outspoken opposition MP donning a T shirt marked “Hure!” and at the back #MeToo!

Women’s lack of voice, choice and control in SRHR reflects in the high rates of GBV and HIV in the region. Violence Against Women Baseline studies conducted by GL in seven SADC countries show lifetime prevalence rates ranging from 25% in Mauritius to 86% in Lesotho.

Southern Africa has the highest rates of HIV and AIDS in the world. Sexual violence against women and girls remains one of the major causes of HIV infection. Marital rape is pervasive and contributes to the HIV and AIDS pandemic. For every two people enrolled in HIV treatment, five become newly infected. Women account for 59% of those living with HIV in Southern Africa, while men account for 53% of AIDS-related deaths.

The 2018 Barometer  reveals that contraceptive usage in the region among women ranges from 12% in Mozambique to 76% in Mauritius. The Barometer reports that only South Africa and Mozambique give women the choice to terminate pregnancy. Unsafe abortion contributes to high rates of maternal mortality across the region. While maternal mortality ratios are declining in other regions, in SADC they increased between 1990 and 2010 mainly as a result of HIV.

Punitive policies and restrictive laws against vulnerable groups create barriers to their access to SRHR services. Only four SADC countries have decriminalised homosexuality – South Africa, DRC, Mozambique and Seychelles, but recent high court rulings in Botswana suggest the ground is thawing in other countries. South Africa is the only country in the world whose Constitution recognises sexual orientation.  No SADC country has decriminalised sex work, although the ruling African National Congress (ANC) in South Africa voted at its December 2017 congress in favour of doing so.

Since 2016, the Alliance has succeeded in lobbying for the inclusion of SRHR in the Post 2015 Protocol; established an SRHR cluster; undertook training of members on SRHR led by cluster lead Southern Africa HIV and AIDS Information Dissemination Service (SAfAIDS) and on LGBTI led by Gender Links (GL). The Alliance also strengthened tracking of SRHR in the annual Barometer; identified key campaigns; established a Young Women’s Network; gathered and analysed over 300 Good Practices on SRHR at the annual SADC Protocol@Work summits. SAfAIDS has launched an ambitious regional programme called Transforming Lives with a focus on sexual-based gender violence (SGBV), teenage pregnancy, unsafe abortion, and promotion of social accountability for youth. The Alliance formed part of an NGO consortium that lobbied health ministers to adopt an SADC SRHR strategy and score card.

GL is a Southern African Women’s Rights NGO that has championed the SADC Protocol on Gender and Development, coordinates the Southern African Gender Protocol Alliance, and lobbied for the Protocol to be updated in line with the SDGs. GL works to implement the Agenda 2030 SADC Gender Protocol in its governance, media and justice programmes, that include working directly with 425 local councils and 108 media houses that have opted to become Gender Centres of Excellence (COE) in 15 SADC countries.

The graphic on the page depicts GL’s Theory of Change for its work on SRHR, showing how GL seeks to “connect the dots” from local, to national, to regional to global level.

Over the last 17-years GL has worked tirelessly to address the high levels of gender-based violence (GBV) in the SADC region. Despite the several strategies utilised the levels of GBV remain at alarming levels. Read more on GL’s GBV research here. In 2018 the organisation, stepped back to move forward. In August 2018 GL met with its’ local government and SADC Gender Protocol Alliance focal points to discuss how to move forward.

GL’s first Amplify Change (AC) Networking Grant 2016 to 2018 was entitled “Strengthening SRHR in the SADC Region Post 2015.” This aimed to: “establish an SRHR working group within the Alliance to gather evidence; advocate for strong SRHR provisions in the Post 2015 SADC Gender Protocol; track implementation and share best practices through SADC Protocol@Work summits.” The Alliance succeeded in lobbying for the inclusion of SRHR in the Post 2015 Protocol; established an SRHR cluster; undertook training of members on SRHR led by cluster lead SAFAIDS and on LGBTI led by GL; strengthened tracking of SRHR in the annual Barometer; identified key campaigns; established a Young Women’s Network; gathered and analysed over 300 Good Practices on SRHR at the annual SADC Protocol@Work summits. 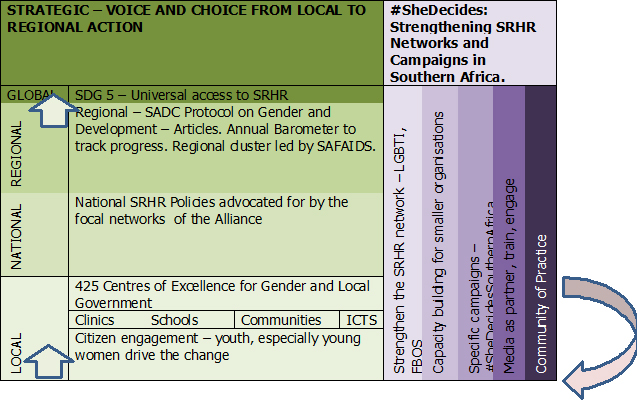 GL’s extension to the Network Grant is called #SheDecides: Strengthening SRHR Networks and Campaigns in Southern Africa.  The initiative builds on the global momentum of the #MeToo, #TimesUp campaign, and in Southern Africa the #MenAreTrash, #NotinMyName, #JusticeForKarabo #IWearWhatILike and other campaigns, that have come together under the umbrella of the #SheDecides campaign. SAFAIDS as cluster lead, and GL as coordinator of the Alliance, propose to launch the #SheDecidesSADC campaign, to press home the gains in the last few years, through strategic communication campaigns that have targets, indicators, and regularly publish results. Key inter- linked campaigns identified include resurgence of HIV and AIDS among young women; menstrual health; teenage pregnancies, unsafe abortion; child marriages; Comprehensive Sexual Education in Schools; and decriminalisation of homosexuality. These will be accompanied by:

The Strategic Grant is called “Voice and Choice: From Local to Regional Action.” In line with the more flexible, strategic thrust of this grant, the main of this grant is to connect the dots from local, to national, to regional level. The hands and feet of the grant are the 425 COE for Gender in Local government. The action includes: