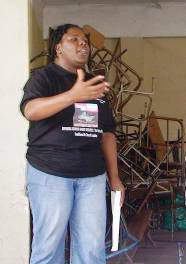 50/50 campaign: so close yet very far
Zambia has a promising track record when it comes to the SADC Protocol on Gender and Development: the country hosted the 2007 Heads of State Summit and signed the SADC Protocol. Zambia has been proactive in attending SADC meetings and even sent a delegation to the 2010 Heads of State Summit in Windhoek, where the government promised to ratify the Protocol before the local elections.

With the elections around the corner, the question now is around how far Zambia has gone in terms of ratifying and domesticating the Protocol? It is interesting to note that Zambia’s current president happens to be the SADC Chairperson for Political Affairs and yet his tenure of office has yielded no results in implementing the Protocol on Gender and Development.

But Zambia goes to the polls this year and in preparation for the elections, the ruling MMD party has held provincial elections over the last two months. So far, the party has held elections in eight of Zambia’s nine provinces and no woman has been elected as provincial chair or for any other strategic position in the party.

It is quite disappointing that there has been no political will from our current government to ensure that we make the 50/50 campaign a reality.

I wonder how many women will be adopted by the ruling party in the forthcoming elections.