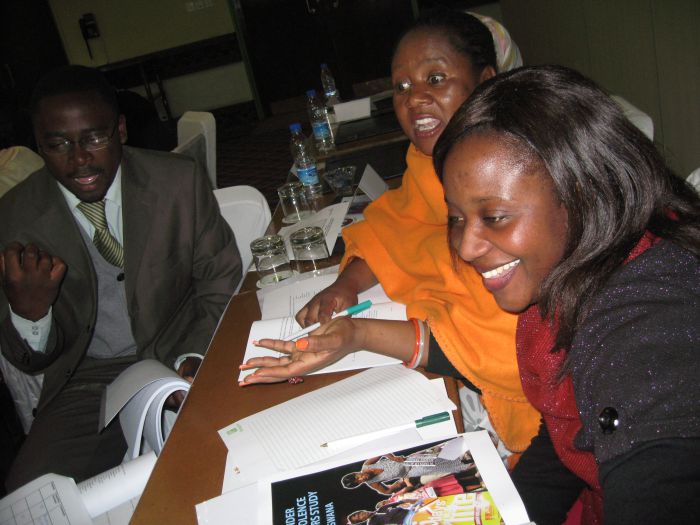 Zimbabawe: Bringing the Protocol to life

“The partnership with Gender Links has actually challenged us. At the national summit in Harare, we found local councillors who were conversant in the protocol; some more so than ministry officials. They have made us up our game,” said Caroline Matizha, Director for Gender.

The partnership between Gender Links and the Ministry of Women’s Affairs, Gender and Community Development (MWAGCD) goes back to the time when both organisations were lobbying for the SADC Protocol on Gender and Development, in 2008. Gender Links did a lot of capacity building work for member states around lobbying. Even while the negotiations on the Protocol were still under way, Gender Links was preparing people to push for its adoption. This kept advocates for gender equality one step ahead of the game. This is when an informal engagement between the two organisations began, and over time, the relationship grew closer.

At the moment, the organisations are working jointly on a piece of research to establish a baseline on the prevalence of Gender Based Violence nationally. “This is a very valuable piece of work for us, because as government, we had never before carried out a nation wide baseline survey on the status and trends. We relied on piecemeal indicators from various other sources and existing surveys. We still had interventions, but now we will have a solid base of evidence. Gender Links went as far as to use ministry staff as research assistants; they have supported us in terms of all logistics and technical support. Since they work regionally, they have done similar studies in other countries. This enriches what we do, because they bring a perspective that we don’t have ourselves.”

Gender Links research manager, Mercilene Machisa echoes the value of collaborative work around GBV. “MWAGCD has been instrumental in getting political buy in and bringing together stakeholders. We have the tools and technical expertise to do the research, but they have the human resources. It is so important to know that this won’t just be a report sitting on a desk somewhere, but because we all have ownership of its results, action will be taken on GBV, in government and in civil society.”

The research project establishing a baseline on GBV prevalence is an example of cooperative work that has gone very well. It has brought together the strengths of each organisation, and connected to Gender Link’s Centres of Excellence (CoE) process as well. “We are very happy, because the ministry wants gender to come alive among local authorities, and we are finding that with Gender Links, this is taking place. In the past, we hadn’t managed to penetrate as far down as the local authority level. But Gender Links, through their COE process, already had these relationships. By working with Gender Links, we are bringing the Protocol to life,” says Matizha.

Another benchmark of collaboration was at the second national Gender Justice and Local Government (GLJG) summit, held in March 2013. The ministry participated actively in this event, with a presentation from the minister, and directors acting as judges in some categories of entries. Officers from MWAGCD presented the work they were doing in certain areas, for example, on gender and climate change.

“In addition to specific areas of work, we see our work with MWAGCD as building the alliance,” says Machisa. “The women’s coalition is a national network. They’ve been working on a new national gender policy, and we’ve been looking at how that will be costed. The ministry has been leading in drumming up political support.”

Gender Links and MWAGCD are in the process of developing an MoU, to identify common areas of partnership. Both organisations have agreed to develop an MoU that is broad in scope, and goes beyond specific cooperation that has taken place on individual projects and pieces of work. Instead, the MoU will look at our common visions and objectives. The draft MoU currently reads, “MWAGCD and Gender Links share the vision of a Zimbabwe in which women and men are free to realise their full human potential in line with the Constitution of Zimbabwe, the SADC Gender Protocol on Gender and Development and all other national, regional, and international commitments to promoting gender equality.”

There have been challenges in the relationship, but on the whole, both organisations agree that it has been very positive. “Any time you bring organisations together, you find that they may have different priorities, or different mandates. But the more joint work we do together, the more we see the value of connecting closely,” says Machisa. “We are able to convene stakeholders at the national level to support the work of Gender Links. At the same time, Gender Links is doing the work on the ground with local authorities, that is informing everything we do nationally,” agrees Matizha.

The CoE process is seen by both organisations as a good opportunity for framing future collaboration, but also a source of tension. MWAGCD is now driving the gender mainstreaming process in Zimbabwe. However, Gender Links and MWAGCD are still trying to negotiate how best to lead the local government work. Machisa spells out, “At the moment, the local council invites the gender officer as a stakeholder to develop a gender action plan. In fact, they should be proactive in going to councils and saying: how do we get a gender action plan?” Matizha echos the issue, saying “Their local government programme would be stronger if our ministry officials had been engaged at the local and provincial level. Provincial officers are there, but they weren’t really engaged, so now we are finding a gap.”

One thought on “Zimbabawe: Bringing the Protocol to life”

Is Gender Links now in a position to work with district offices of the Ministry of Women Affairs in Zimbabwe?
Our organisation, Southern Institute of Peace-building and Development (SIPD) is looking to work with these district offices on GBV prevention/ awareness activities during this year’s 15 days of activism, hence the question.
Regards,

Comment on Zimbabawe: Bringing the Protocol to life Cancel reply