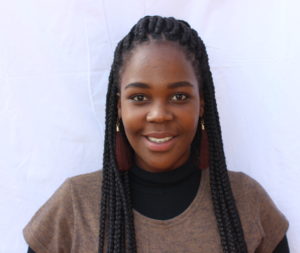 Yolanda Dyantyi is a 21 year old woman and feminist from Johannesburg who is currently based in Soweto. She is an excluded student from the university currently known as Rhodes, in Grahamstown, where she was one of the women who led the anti-rape protests in 2016. The protests aim/ed at calling for systemic change to the institutionalized rape culture on campus and the perpetual violence against minority groups, mostly being women. She is currently serving my lifetime ban from the academy where she was doing her third and final year in BA degree double majoring in Politics & International Relations and Drama studies. She says ” I am not allowing that aspect of my life to deter me as I continue to be a voice for gender activism and a militant against oppression”. She was recently nominated as one Marie Claire South Africa’s ‘Badass Women 2018’ and with her star sign being a Taurus which represents the bull, she further states  “I can be stubborn at times but I remain optimistic about life and look forward to new journeys in the future.”