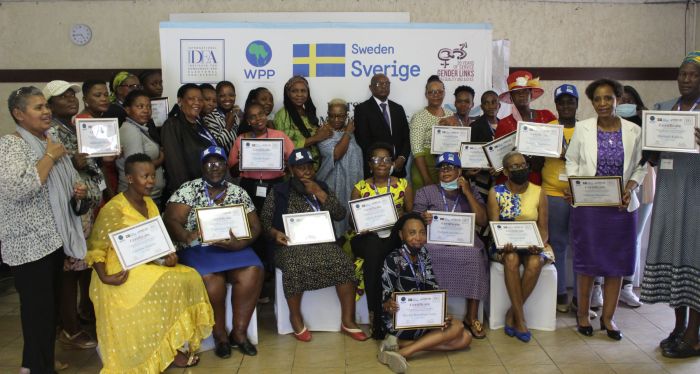 Francistown, November 25, 2021 Women politicians from across the political divide in Botswana have called for the overhauling of the Constitution and the Electoral Act ahead of the 2024 elections to ensure women’s equal and effective political participation.

The participants of the second leg of the Women’s Political Participation Cross Generational Academy training held in Francistown during the week of 15 November, expressed disappointment that the President appointed only men to his four-person constitutional advisory team within the ruling Botswana Democratic Party (BDP).

They reiterated the call by the first WPP Cross Generation Academy in Palapye the week before to President, Dr Mokgweetsi Eric Masisi to appoint an equal number of women and men to the Constitutional Review Commission. The President announced in the State of the Nation Address (SONA) on 8 November that he would appoint Commissioners to lead the Constitutional Review, delayed by the COVID-19 pandemic, by mid-December this year.

Women in Francistown noted that the First Past the Post (FPTP) electoral system disadvantages women contesting elections at both local and national elections. Women are calling for a mixed system of First Past The Post (FPTP) and the Proportional Representation (PR) system.

Participants pointed out that patriarchal and cultural practices disadvantage women aspiring for political positions Among others, the First Past The Post (winner takes all) system favours more men than women as campaigning need finance which women often lack.. They called for political funding for all candidates and all parties.

Globally and in the SADC region it has been shown that the Proportional Representation (PR) system is far more conducive to women’s political participation than the FPTP system. Furthermore, there is a direct correlation between the existence of Temporary Special Measures (TSM) to increase women’s political participation and their representation in parliament and local government. Botswana has a FPTP system and no TSM, leaving it at the bottom of the SADC league.

The women politicians agreed that a mixed FPTP and PR system would draw on the strengths of both systems and help address the inequality in political representation. Presently women comprise 11% of MPs and 18% of councilors. These numbers have remained constant or dropped over the last three elections.

In his address to the graduates, the Member of Parliament for Francistown South, Hon. Wynter Mmolotsi, concurred, encouraging women politicians to influence constitutional review process, to ensure gender parity. He said the call for 50/50 inclusion should not end with the Constitutional Review Commission, but be taken to political parties.

“Make sure you are well represented in your parties’ constitutional advisory committees, look at the advisory committee of the BDP, which is all men. Do you think they will include women and youth issue? If you are left out at that level, do not expect any changes at national level. Fa le se koo lo jelwe le jelwe. 50% representation should not be like a favour, but it is your right” Mmolotsi said.

Representatives include young political aspirants and seasoned women politicians from five parties (AP, BCP, BDP, BNF and BPF). Women’s political representation at national level in Botswana is the lowest in the SADC region.