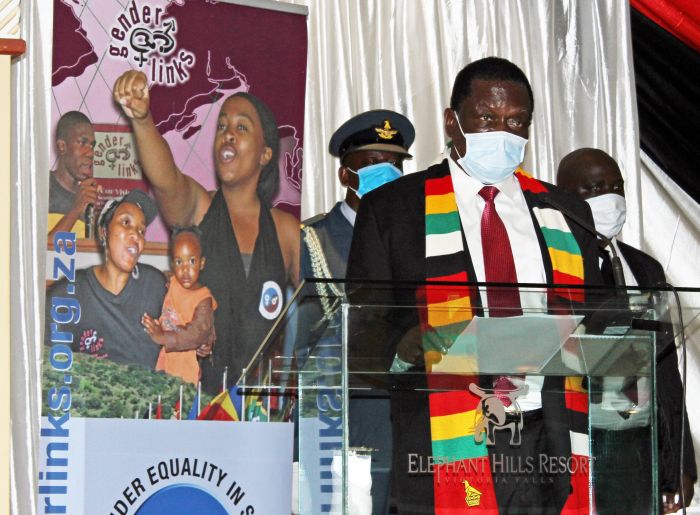 Harare, 15 December 2020: In a landmark pronouncement, Zimbabwe’s President Emmerson Mnangagwa has signaled his support for a quota for women in local government following intense lobbying at the inaugural Women Councilors Indaba (meeting).

While Zimbabwe presently has a Constitutional quota for women at the national level, women in local government have repeatedly been excluded from these provisions, despite a commitment in the 2013 Constitution to gender parity in all areas of political decision-making.

“You are advocating for an improvement in your representation at local government level. We fought for democracy and there was a lot of sacrifice by the girl child and boy child for us to achieve that democracy,” President Mnangagwa told the Women in Local Government Forum (WiLGF) meeting on 11 December.

“Currently councilors are elected on the basis of that democracy,” the President added. “You are now asking me to panel-beat democracy in order to meet our needs rather than our needs to be met through plain democracy. Fortunately, I am in agreement with you, and that is granted, and I will ask the Minister of Local Government to begin the process.”

Women comprise just 14% of councilors in Zimbabwe. This figure has declined by two percentage points each election since 2013, when women comprised 18% of the elected representatives in local government. Gender Links (GL) organised the historic gathering in Victoria Falls attended by 300 delegates from urban and rural local authorities in partnership with the Zimbabwe Local Government Association (ZiLGA).

Presenting the WiLGF submission, Councilor Idirashe Dongo,  Chairperson the Midlands chapter of  the Women in Local Government Forum from Zibagwe Rural District Council, declared that “women’s representation at the local level is critical for prioritising women’s practical and development needs as well as localising the Sustainable Development Goals through policy decisions on education, primary healthcare, water and sanitation, transport and a host of other services.”

In November 2019 the cabinet approved the amendment of section 124 (1) (b) of the Constitution to extend the women’s quota provided for at national level, due to expire in 2023, for 10 more years. The amendment excludes local government. Ironically, Article 17 of the Constitution provides for the “full participation of women in all spheres of Zimbabwean society on the basis of equality with men.” It further states that “the State must take all measures, including legislative measures needed to ensure that both genders are equally represented in all institutions and agencies of government at every level.”

At the national level, 30% of the seats in parliament are reserved for women on a Proportional Representation (PR) basis. Women are also free to contest the elections in the main elections, conducted on the basis of a First Past the Post (FPTP) electoral system. Elections at local level are conducted solely on FPTP basis. The WiLGF is arguing that the system at national level be extended to local level. Alternatively, they argue that all parties be obliged by law to field 50% women candidates in the FPTP seats at the local level.

The details of the quota will now be up to legal drafters guided by WiLGF and other activists in the 50/50 campaign. What is important is that the issue is now squarely on the political agenda, with enough time before the 2023 elections for the necessary amendments to be made. To keep up the pressure, the President urged that the Women Councilors Indaba become an annual event.

Should Zimbabwe adopt a quota for women in local government, it will join several Southern African Development Community countries that have done so. These include Lesotho, Namibia, and Tanzania.