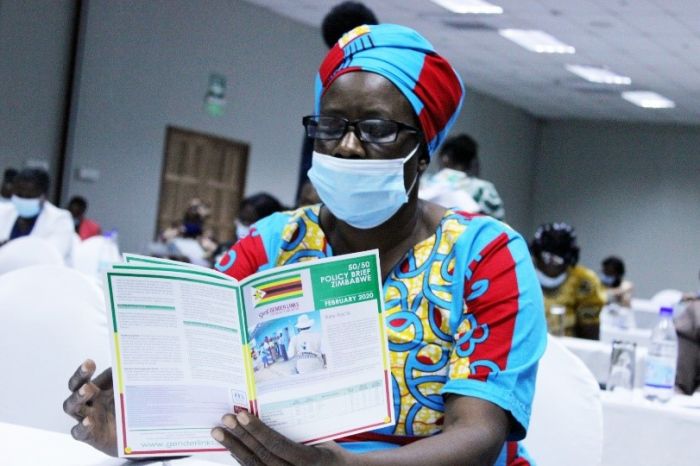 Harare, 19 April: The campaign for a quota for women in local government went into high gear in Zimbabwe this week with the tabling of a Constitutional amendment in parliament.  This seeks to extend the system in place at the national level to the local level with 30% seats reserved for women and distributed on a Proportional Representation (PR) basis.

Justice, Legal and Parliamentary Affairs Minister Ziyambi Ziyambi said the amendments would propose a two-term cap as is the case with National Assembly proportional representation and assess if intended objectives would have been achieved. “We need legislation to give effect to this policy direction,” he said.

The move comes after Zimbabwe President Emmerson Mnangagwa and his cabinet offered their full support and approval of  a 30% women’s quota at the local level in the country following the first ever  Women Councillors Indaba  convened by Zimbabwe Local Government Authority (ZiLGA) , Women in Local Government Forum (WILGF) in partnership with Gender Links (GL) in December 2020.

Speaking at the Indaba Councillor Idirashe Dongo, Midlands chapter Chairperson of the WILGF from Zibagwe Rural District Council, noted that “women’s representation at the local level is critical for prioritising women’s practical and development needs as well as localising the Sustainable Development Goals through policy decisions on education, primary healthcare, water and sanitation, transport and a host of other services.”

Since the adoption of a new constitution in 2013, Zimbabwe has had a legislated quota of 60 seats distributed among parties on a PR basis at the national level, in addition to the 210 seats open to women and men in the constituency or First Past the Post (FPTP) seats.  Although Article 17 of the Constitution provides for equal representation of women and men in all areas of decision-making, local government is presently not included in the Constitutional quota.

This amendment is a huge milestone as GL turns 20. Over the last decade, GL is credited with putting gender on the local government agenda across the SADC region. This work began with seminal research titled At the Coalface: Gender and Local Government in Southern Africa. The research led to GL working with nearly 400 councils in ten countries that have elected to become Centres of Excellence for gender  in local government work.

Crediting Gl with this achievement former Mauritian Minister of Local Government, Herve Aimee said: “The Local Government Act is indeed a milestone towards gender equality. I would like to thank GL for all their help over the last two years ensuring that the radical changes I proposed became reality. We not only trained women to join politics but we worked with the authorities to change laws and give women space…”

A high level delegation from Zimbabwe went to Mauritius to learn more about the gender neutral approach in the Local Government Act. The Zimbabwe Ministry of Local Government and Public Works, Ministry of Justice, Parliamentary and Legal Affairs, ZEC, UNWOMEN and Gender Links participated in this process.

In 2019, GL organised a Southern African Development Community (SADC) experts’ mission held in Zimbabwe with  experts from Lesotho, Mauritius, Namibia and South Africa sharing lessons learnt from the implementation of the different electoral systems and how they work in their countries. The mission came up with clear strategy for lobbying and advocacy to increase women’s political representation and participation at both the local and national level.

A similar initiative was convened in Zambia in 2020 by Women and Law in Southern Africa (WLSA) in partnership with GL, Non-Governmental Organizations Coordinating Council (NGOCC) and the Ministry of Gender to develop a Zambia Gender and Elections Strategy ahead of the 2021 elections including a 50/50 campaign ahead drawing from the lessons learned in the 2016 Count Her In Elections campaign.

At the local level Gender Links in partnership with the Local Government Forums and other partners conducts 50/50 campaigns with local authorities taking ownership of these campaigns as deliberate acts to push for more women in decision making positions .

To amplify and make this work visible GL has consistently partnered with the media to put Women’s Leadership and Political Participation on the news agenda. GL works with the media to profile women in decision making and influence the representation and portrayal of women in politics through more gender sensitive and responsive reporting on women’s contribution to politics and their political capabilities.